What is a programmable logic controller?

What is the definition of “PLC”?

A programmable logic controller (PLC) is an industrial digital computer that is robust and adapted to control manufacturing processes, such as assembly lines or robotic systems, or any activity that requires highly reliable control and easy programming and diagnosis of process faults.

PLCs were first developed in the automotive industry to provide flexible, robust and easily programmable controllers to replace wired relays, timers and sequencers. Since then they have established themselves as highly reliable automation controllers suitable for harsh environments. A PLC is an example of a “hard” real-time system, as the output results must be generated within a limited time in response to input conditions, otherwise unintended operation will occur.

How does a PLC work?

PLCs can be described as small industrial computers with modular components for the automation of control processes. PLCs are the controllers of almost all modern industrial automation. An API has many components, but most of them fall into the following three categories:

PLCs are complex and powerful computers. But we can describe the function of an automaton in simple words. The PLC accepts inputs, executes a logic on the inputs of the CPU and activates or deactivates the outputs according to this logic.

The brain of the entire PLC is the CPU Unit. This module is usually located in the slot next to the power supply. Manufacturers offer different types of CPUs, depending on the complexity required for the system.

The CPU consists of a microprocessor, a memory chip and other integrated circuits for controlling logic, monitoring and communication. The CPU has different operating modes. In programming mode it accepts logic downloaded from a PC. The CPU is then put into run mode so that it can run the program and execute the process. 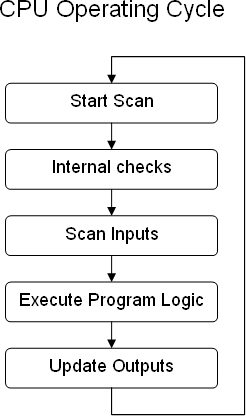 Input devices can consist of digital or analog devices.  A digital input handles discrete devices which give a signal that is either on or off such as a pushbutton, limit switch, sensors or selector switches.  An analog input converts a voltage or current (e.g. a signal that can be anywhere from 0 to 20mA) into a digitally equivalent number that can be understood by the CPU.  Examples of analog devices are pressure transducers, flow meters and thermocouples for temperature readings

Output devices can also consist of digital or analog types.  A digital output either turns a device on or off such as lights, LEDs, small motors, and relays.  An analog output will convert a digital number sent by the CPU to it’s real world voltage or current.  Typical outputs signals can range from 0-10 VDC or 4-20mA and are used to drive mass flow controllers, pressure regulators and position controls.

Process of a scan cycle

There are 5 main steps in one scan cycle: