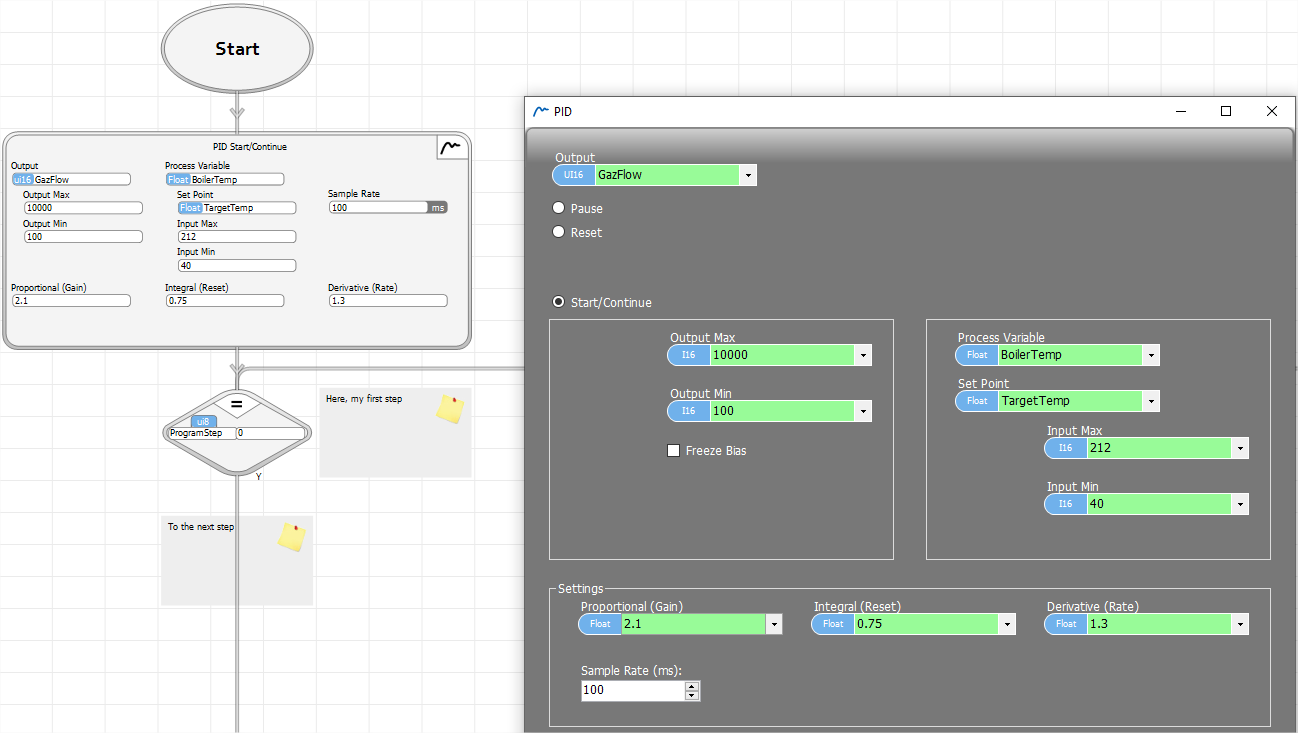 A PID Pause block stops the PID from operating.
Select the Output variable of the PID that you want to pause, as shown here..

A PID Reset sets the Integral value to the value required to produce an Output equal to the Reset Value. You should do when starting a PID. The Start/Continue does not initialize the Integral value, because it does not know whether this is the actual Start or whether it is a Continue. When you place a PID Reset in a flow chart, select the Output variable of the PID that you want to reset, as shown here. Select the value of the PID output to start the PID with.

A short history to understand the principle of regulation

First of all, the most intuitive thing you do when you want to drive at a certain speed on the motorway is to say to yourself: “the slower I drive compared to the speed I want to drive, the more I press the accelerator pedal”. The pressure on the accelerator is therefore proportional to the mistake you make. That is, proportional to the difference between the desired speed and the actual speed.

With this method, if you are at 50 km/h, you press the accelerator pedal down fully. Your speed increases rapidly and approaches the speed limit. Once the speed reaches 130 km/h the error becomes zero, so you let go of the accelerator. Then, due to the inertia effect of the car, you have exceeded the set speed.

When you let go of the accelerator, the car starts to slow down until it falls below the set speed again. So you start to press the accelerator again, and then more and more as you go along to try to reach 130 km/h. Finally, you manage to stabilise your speed at a lower speed than the one you have chosen, say 120km/h.

That’s when you think: “Damn! I can’t get the speed I want. I have to add another rule to my reasoning! ” . So you decide that if your speed stays below the target for a long time, you will accelerate more and more. So you decide that in addition to accelerating in proportion to the error made, you should also memorise this error over time. The greater the overall error, the faster you accelerate.

Once you reach 130km/h, the error is negative and therefore the overall error decreases. You therefore lift your foot off the accelerator more and more strongly until you return to 130 km/h. At 130km/h, the error is negative again and you continue to decelerate. So you accelerate again and again until you finally stabilise at 130km/h after multiple oscillations.

So, if you are approaching 130 km/h quickly, you will be quick to lift your foot off the accelerator so that you do not exceed 130 km/h too quickly. So by anticipating, you reduce the oscillation phenomenon and you quickly stabilise at the desired speed!

There you go, you have intuitively made a PID type regulation!

How to tune a PID? (Proportional, Integral, Derivative)

A simpler method of manually determining the P, I and D values is to disable the Integral and Derivative terms and set the Proportional Band to the minimum. The resulting oscillation width Xosc and oscillation period tosc can be used to determine the PID parameters shown below.

These values result in a slightly overdamped response and therefore all values can be reduced slightly to give a more responsive loop.